THE COMMITMENT OF CONVEYOR BELTS

The conveyor belt system or transport belts have several functions within the industry: they can be a component in assembly lines, function as removal in manufacturing processes, assist in the transport of loads and act as a link.

At TAD, we mainly use transport belts as an alternative to vibratory linear feeder with guide for the transfer buffer function, when the characteristics of the parts, the necessary speed or the sound level so require them.

WHAT ARE CONVEYOR BELTS?

A conveyor belts system is a continuous transport system consisting of: a frame usually of anodised aluminium profile and a continuous band that moves between two drums, powered by an electric motor that is associated with a reducer that transmits the desired revolutions to the roller, or drive sleeve, which drags to the corresponding band, carrying on it the required parts.

HOW DOES A CONVEYOR BELT WORK?

All conveyors have channelling guides in accordance with the part to be transported and with the need to maintain the position or orientation of the parts up until their delivery to the receiving station or machine to be fed. The channellings may be of stainless steel, polyamide, adjustable in width and height in the case of transporting a range of parts, folding or with holes for rapid ejection of parts.

There is a wide range of conveyor belts, hence their length and width are defined by the size of the parts to be transported and by the requirements of the machine or device to feed.

OUR conveyor BELTS FOR TRANSPORTING MATERIALS

The belt’s linear speed of advance can be fixed or adjustable by installing a frequency controller.

To achieve the maximum customisation, and therefore the satisfaction of each customer, special modifications can be made if the application requires so, such as, for example, for specific industries such as food, pharmaceuticals or for clinical material with FDA requirements, replacing the anodised aluminium chassis and treated steel rollers for others made of stainless steel.

As is the case with the linear vibrators (Transfer buffer units) it is essential to incorporate conveyor belts in most applications and advisable for the following reasons:

Advantages and benefits of using a conveyor belt 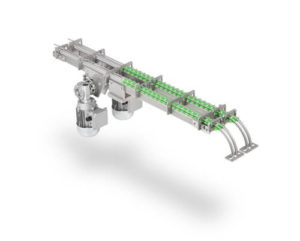 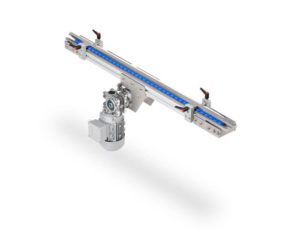 If you continue to use this site, you accept the use of cookies. More information